Savannah and Dylan met at work, but it wasn't love at first site. (Not Yet) They talked and sat by each other at work and a friendship grew. Both moved on to separate jobs but kept in contact. On a date over drinks, Savannah began to understand there was something more between them. Dylan knew after a date over some burritos and tacos at Taco Bell that there was no one like her.

As time went on Dylan loved that Savannah kept him grounded and gave his dreams focus and clarity. Her smile could light up a room! As their relationship grew so did their love of weekend trips finding neat and unique places to eat. I guess you can say they are "foodies" or at least thats what I would call it. Savannah loves listening to Dylan's dreams of where they could go and what do. Visiting the beaches in the Mediterranean or sailing in Greece is just a few examples. 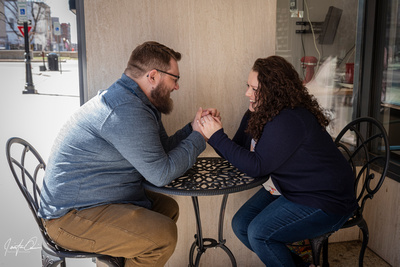 The night had arrived! Dylan did some studying and thought a proposal at dinner time was the perfect plan. He began to have doubts. Was it to cliche'? I am sure he was dreaming up something that was different, some way to catch her off guard but he just could think of a way. Savannah loves to watch him cook. I am guessing cooking her a meal and slipping the ring into the night wouldn't work either. When the night came for the dinner out they dressed up and traveled to the Metropolitan Grill. They ordered and Savannah could tell that something was coming but it wasn't happing. Dylan said "It didn't feel right". So he kept that ring in his pocket all through dinner. The next morning Dylan finally caught her off guard. He pulled out the ring and asked her the question she had waited for all night. Savannah said,"Yes!". 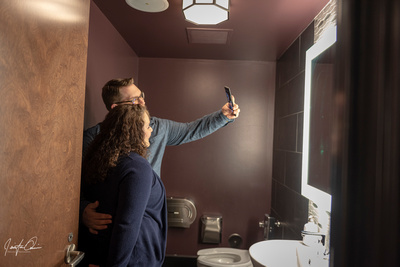 Finding a location for Dylan and Savannah wasn't too hard for me. Their love of food and travel mixed with a interest in documentaries led me to think of Downtown Springfield. I could tell these were city people with an interest in growing in the suburbs. We met at the Gilloz theater and chatted a bit till the security moved inside. We started are shoot under the lights of the Marque before heading toward the square. Dylan and Savannah are so spontaneous! It was so much fun jumping into some outdoor seating areas for some quick pics while smells of food drifted through the doors. We ventured passed Mud House Coffee and a bank with the tunnel drive thorough that some local artist have created a beautiful eclectic mural. Savannah and Dylan chose to stop and rest a bit at the Hotel Vandivort. Here we had to check out the famous bathroom selfie mirrors! These two are so much fun! We finished up our day on top of a parking garage over looking the city of Springfield. 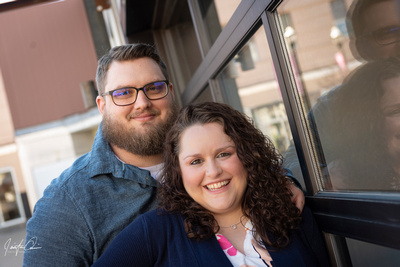 Meeting Dylan and Savannah was like meeting some old friends and I can't wait for the wedding day!