Lord of the Rings Wedding theme in April

Alicia and Cordell met uniquely. Alicia was a tattoo artist in her little town of West Plains. One night a client and his cousin came to get matching tattoos for his birthday. The friendship that began that day between Alicia and Cordell became so much more.

Alicia is a big fan of Lord of the Rings and has always dreamed of a wedding like that. Cordell did a lot of research and found a ring-like lady Galadriel's ring. He held onto it for some time while dreaming of the perfect plan. While visiting family in California, Cordell asked her father for his blessing. He also wondered where would be the best place. Dad had a great idea. So the plan was set to propose while hiking in the Sequoia National Park. They stopped to take a pic of the scenery. When she turned around, Cordell asked her to marry him. She said "Yes"! He told her he was going for a Lord of the Rings theme. The ring was Galadriel's ring of power, and proposing in the forest was like Lothlorien. 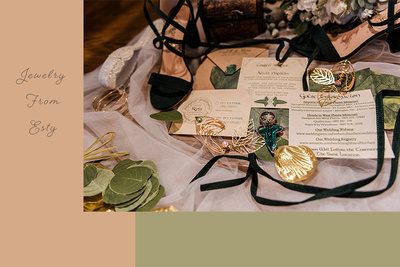 The setting for the Wedding was in Kay's Forest in West Plains, Missouri.

Moments between Mother and Daughter are so sweet. 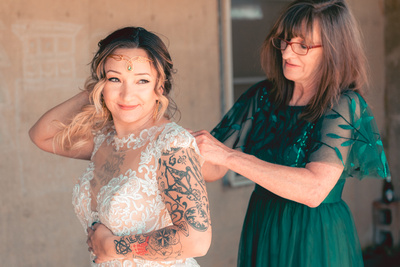 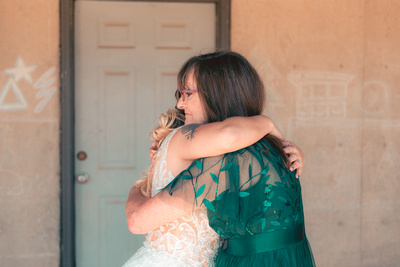 Alicia thought of all the details. Danielle Carr at Joey's Hair Design and Spa worked a jeweled piece into Alicia's hair. She picked a dress called Patrice by Morilee - Madeline Gardner from Gracy's Bridal in Springfield, Missouri. The Bridesmaid's dresses came from Norman's Bridal in Springfield, Missouri. These dresses were complemented by the Groomsmen's outfits which were tan dress pants and white shirts. 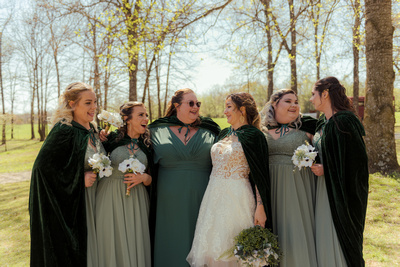 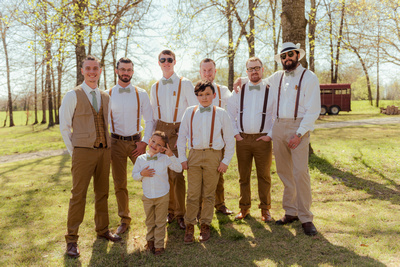 The bride made her grand entrance on horseback and she rode down to the pond for the ceremony. The guest was surrounded by tall trees and they watched the ceremony. There was laughing and a few tears as the couple read their vows to one another. What a beautiful sunny day! 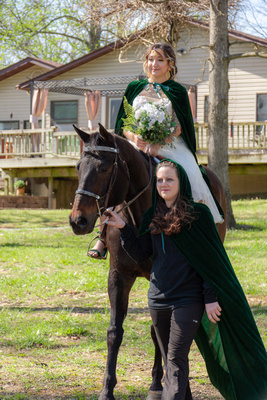 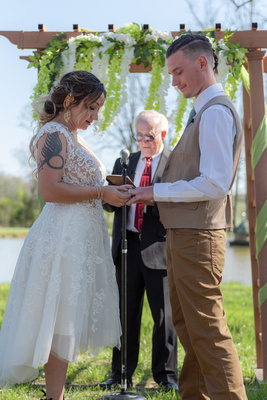 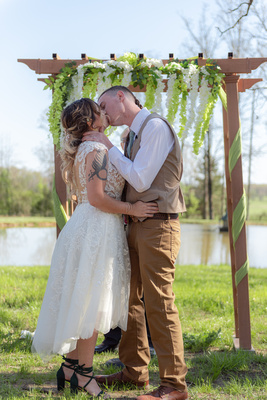 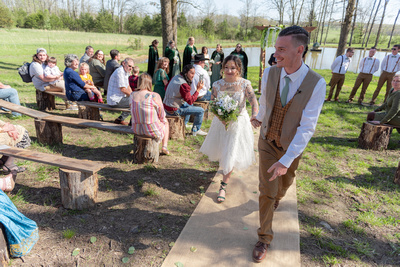 The DJ from Complete Weddings + Events played music from Lord of the Rings for the ceremony and hosted an amazing evening of events. Jeff Wood Cakes designed a cake to complete the theme with a Hobbit house on the top of a three-tiered cake. The flavor was Red Velvet. The couple rented some items from Eventful Rentals in Springfield to turn the barn into a dining hall fit for a King and Queen. The Bride and Groom had practiced the dance Thinking Out Loud by Ed Sheeran. They nailed it! What a first dance! The guest enjoyed dancing and the photo booth till it was time to send the couple off with a sparkler exit.